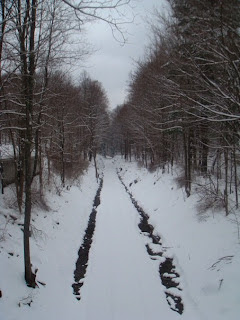 In defiance of this absurdly hot and sticky and nasty weather (is that clear enough? I just want to emphasize the misery, make sure you FULLY UNDERSTAND HOW TERRIBLE IT IS) that has settled on NYC in the past few days, I am going to finally write the third and final installment of my winter adventures. Yes it's long overdue, but perhaps aptly timed. Much as I hate being cold, I am looking longingly at these pictures, wishing I could run through the snow in a bikini as I sit in my non air-conditioned computer room writing this.

This last weekend adventure was a Recent Grads retreat in the boondoggles of Connecticut. Like no cell phone service kind of boondoggles. My favorite kind. As it goes, this particular retreat consisted of 60 New York twenty-somethings from Redeemer taking a weekend to get out of the city and into nature. Of whom I knew probably 15 well and another 10 by name/sight, sooo basically it was like our own private retreat. We had some talks (the topic of the weekend: Biblical Decision Making- seriously some of the most useful stuff I've ever listened to, I can send you more information if you're interested in the subject), we had some worship, we had some cheesy team games. And we had some dang good food. Seriously, for being out in the absolute middle of friggin nowhere, this place serves up the most delicious food, legit gourmet. Quite a treat, I must say. But most importantly, we had a lot of free, unplanned, unstructured TIME. Something hard to come by in the big city.

Given the foot of newly fallen snow and abundance of southerners not used to such a "treat" we did quite a bit of sledding. And by "we" I mean everyone else BUT me. Why, you may ask did I not partake in the sledding? Well, you see, it was about 10 days after my heart surgery and while my exploding heart spilling onto the white snow as I hit a bump while sledding may make for a good Salvador Dali painting, I was pretty sure that my parents, friends, and heart surgeon would not find it so amusing. So I refrained. Except for once, when no one else was going down the hill and I wouldn't have to fear hitting another human being. It was totally worth it, even though Alexandria was convinced I was going to die. Did I mention the Capture The Flag game outside in this foot of snow in which I also didn't get to participate? Yeah, well now I have.

But, I took some great pictures, relaxed, slept, ate, caught up with friends, and in general soaked up my weekend away from reality. Even though I'm fairly convinced that in heaven our reality will be that we can sled any time we want, even say, in June at Myrtle Beach. Without heart surgeries to stop us. So I can look forward to that. Not that I anticipate spending eternity at Myrtle Beach, but it's just the first thing that came to mind, and using the backspace key requires way too much effort in this heat.

So how about a few pictures, since that's really all I have to say? And I'm perspiring way too much to continue writing anything else. Thinking cool thoughts. This heat wave has to end sometime. Right? 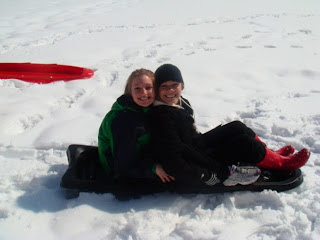 Two Southern Belles with Super Smiles at the chance to sled. 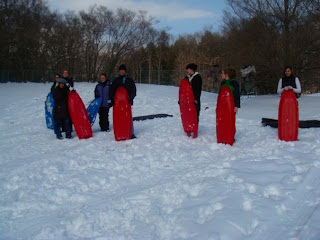 Immediately before a little race down the hill. 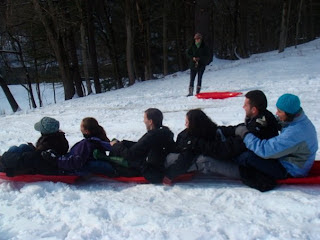 This looks really cool, but they actually all tipped over about 2 seconds later. 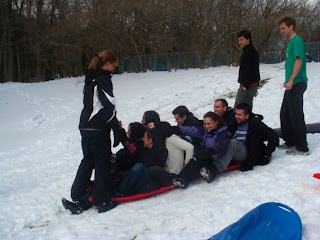 Again, in theory this was a good idea, but it wasn't so pretty when they were all facedown in the snow. 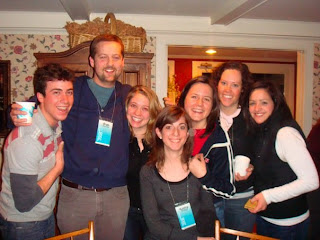 Some of my peeps- look at those big smiles.
Posted by Unknown