Gospelfest. With a Capital G.

Last week my friend Pamela mentioned to me that I have been delinquent in my duties as a blogger by not writing about Gospelfest. And how that should clearly be number one on my priority list of "things to write about." Because she was there. And wants to be mentioned on my blog with a burning desire deep in her soul. Just kidding. But as you can clearly see, I have not posted in 8 days. Because apparently my company thought it would be a funny joke to double staff me in my final two weeks. Ha. Ha. Ha.

I have many a topic to write about, but this is the most ancient event, so I will start here. So way back many moons ago I found out about the McDonald's Gospelfest happening in Newark, New Jersey. Intrigued, I looked into this little event and decided way back in some winter month that it seemed like an excellent June Saturday afternoon activity. Which was all well and good at the time, except then in the intervening 6 months (I kid you not) 7 other concerts that I wanted to go to all were on that day. And much as I was excited to try something new and different, I kind of just wanted to see the free Vampire Weekend concert in Central Park. Or REM at Jone's Beach. Or go with my choir to the Mikado. But alas, these are our choices and we deal with their repercussions.

No but for real, I was so completely curious about this gospel festival for many a reason: 1) I had never been to a gospel concert, let alone a festival 2) I was pretty sure that Pamela, Jake, and I would be the only white people there, and this gave me a sense of "authenticity" about delving into another culture. Or something like that. It sounds less racist in my head than it is probably coming across right in this moment. But if it were say a PingPong tournament and I said I thought we would be the only white people, no one would be offended. Right? So ok, that's only two reasons, and I should probably have at least three if I'm going to say "many" a reason. But alas, it's 10:26pm and I'm sitting in a room whose temperature is approximately that of the surface of the sun, and I JUST WANT TO GET THIS POST FINISHED.

Right, so off we went to Newark. Now, my wonderful friend David lives in Newark and has been teaching (corrupting?) the youth of America for two years. Since we all feel sorry for him that he lives in the armpit of America, we occasionally humor him by going out to Newark, pretending it has something (anything?) to offer that one of our five boroughs does not. I know, I know, we're good friends, you don't have to remind me. But all this to say, I have been to Newark before. Even at night. *gasp* And in fact I have never even felt as unsafe as the entirety of the four years I lived in West Philly. Go figure. This time, however, it was broad daylight, and we were venturing to the monstrous Prudential Center (yay corporate sponsorship!) for our little event.

Now, my understanding (read: assumption with absolutely no investigation) of this festival was that it started at 3pm and would be a few hours, and we would have our fix of gospelness for a good long while. Oh but no. It was actually a FESTIVAL, like a real all-day-event with even a designate dinner-break written on the flyer/schedule. Yes, it started at 3pm, but it went until ELEVEN PM. Way more intense than anything for which I was prepared. As it turned out, the "main" events were at night (not that I knew ANY of the names of the headliners) and the 3 hours we had devoted to gospelific times were filled with a hodgepodge of mediums that all apparently fall under the umbrella of Gospel. Now, I suppose prior to that day my idea of said "umbrella" was like one that you buy from the hotdog man on the sidewalk for $3. Small and easily broken. Oh but no. The real umbrella of Gospel is apparently like a golf-umbrella- you know the kind that makes you curse at the individual holding it as you walk down the NYC sidewalks because it takes up an unfairly inordinate (some inordinates are fair) amount of space and YOU have to be the one to move, but dang it, that dude is staying dry and you're huddled under your sorryass $3 farce of an umbrella. This analogy is not quite right, so I will stop.

We're talking dance- allllll kinds of dance. Step teams (oh my gosh, if only I could step). Poetry. Rap. Female vocalists. Children's choirs. Spanish vocalists. Adult choirs. Male vocalists. And on and on and on. But let me just tell you, it was friggin awesome. Because 1) having never been to a gospel concert, I got a way better view of the range and breadth and height and depth of all things Gospel and 2) we were definitely the only white people there. So I just watched. And absorbed. And stared mouth-agape for the vast majority of my time there. Given that it was such a range, there were certainly some not-so-great groups. But oh wow, it was worth it for those 1 or 2 gems in each category that really just wowed the crowd. And you know what's really cool- the expressiveness of an all-black audience. After seeing that crowd, I realized we white people do NOT know how to show our appreciation for a performance. Because let me tell you, they were cheerin and hootin and on their feet givin praise. Now it may also have had something to do with their love of Jesus, but I can't say definitively. In any event, it was fun. And as it turns out, Vampire Weekend's free concert got rained out. So looks like I got the better end of the bargain. Holla. 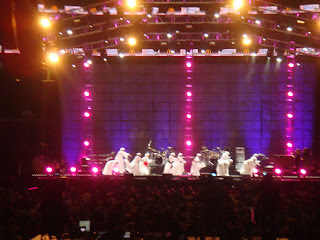 One of the amazing interpretive dance troupes. 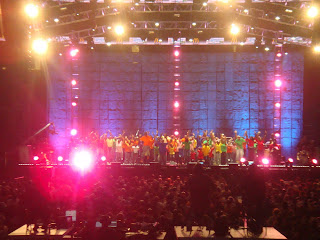 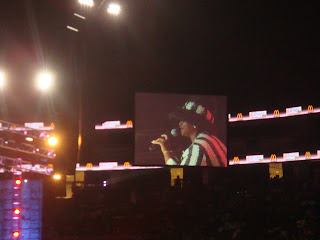 Hahaha.... how am I just reading this now!!!
-PamCakes