The middle of the adventure.  Right smack in the middle of our time here.  It is pretty much unbelievable to me that two months have come and gone.  But week 8 was great because we studied the book of Acts. Studying Acts at ACTS made us realize how much our program is a model, in many ways (though certainly not all) of the early church.  Living together, sharing everything, discipleship, prayer, study.  THIS is what the Christian life/church was intended to be.  Which gives us pause to ask ourselves why we have to come to an apple orchard in eastern Washington to live out our faith as Christ modeled it in the early church and we don’t/can’t do that as readily outside of this bubble (which it most certainly is).  Food for thought.

On Thursday I decided I wanted to go to Portland.  I had never been, and hey, there’s no time like the present.  So at lunch I said, “I would like to go to Portland.  But I have no one to go with, no car, and nowhere to stay.  So if anyone wants to fulfill any of these parts of the plan, that would rock.”  And lo and behold within 15 minutes we had a car, people, and a place to stay.  Sweetness.

So off we were to Portland on Friday night to stay with a sister of one of the guys on staff.  None of us knowing her or her husband.  But them welcoming five of us warmly into their home.  Yet another reason why living in this kind of community is awesome.

So… Portland.  I think the single best word I could use to describe Portland is WEIRD.  They have some city-wide “motto” to “Keep Portland Weird.”  And quite honestly, I don’t think they’ll have too much trouble with this.  Because it is SO.  WEIRD.  The people, the places, the everything.  But I kind of liked it.  It is yet another example I will point to when people say “Oh, America is the same everywhere, all your cities are similar, etc.”  These people are usually European.  And I think this is an outright farce.  Case in point- New York City and Portland.  Couldn’t be two more diametrically opposite cities.  I’m just sayin.

For our whirlwind tour of Portland, I took care, per usual, to memorize the map of Portland prior to our arrival and do a few thorough Google searches and information gathering interviews of people who have been to Portland.  Just to be prepared.  We started out with Stumptown Coffee- pretty much amazing.  And this from a gal who doesn’t particularly like coffee.  Then we walked to Goodwill on 10th.  This is no ordinary Goodwill, it is in fact a Goodwill boutique (who knew such a thing existed!) where they only sell name-brand and often high-end name-brand clothing.  Second hand.  Let me tell you, some of my best thrift store purchases of all time were found there.  Then we headed to the infamous Powell’s Bookstore.  AN ENTIRE CITY BLOCK OF BOOKS.  I could have stayed there all day.  From there we made our way to the Saturday Market, one of two Saturday farmer’s markets in Portland.  We chose the hippie market over the yuppie market, because yuppie farmer’s markets are a dime a dozen nowadays, if we’re being honest.  But hippie grungy homeless people-filled, protester-ridden farmer’s markets?  Not so common.  I bought myself a sweet hat, which should serve me well for winter in Romania.  After we had our fix of weirdness, we stood in line for doughnuts.  I felt like I was home- people stand in line for food all the time in New York!  And apparently nowhere else based on my friend's reactions to standing in line for DOUGNUTS.  These were worth the wait.  Voodoo Doughnuts, where “the magic is in the hole.”  And yes, they had underwear with their motto written on them.

Our afternoon was spent at OMSI- the Oregon Museum of Science and Industry.  Please take a moment to swoon at the beauty of that museum title.  It includes SCIENCE.  So wonderful.  Oh how I wish we had more time to explore that fabulous place!  But alas, 2.5 hours of our 10 in the city would have to suffice.  Before heading home we stopped at the massive REI and ogled all the wonderful outdoor gear we could not afford.  Yes, ogled.  Finally, we grabbed a burrito at a cute little restaurant called Cha-Cha-Cha and headed back to the land of Washington. 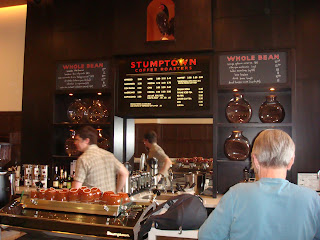 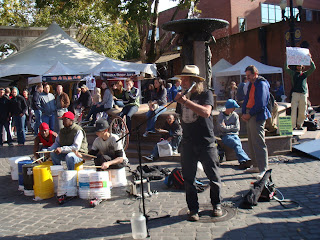 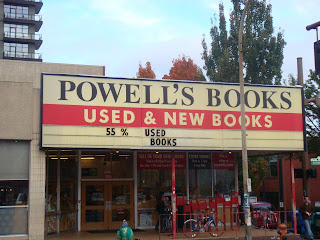 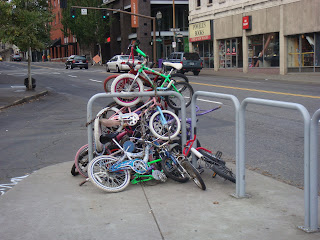 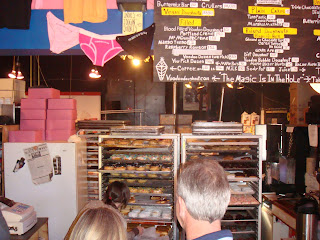 All in all, a great mini-trip, a fun day of exploration, and a lovely weekend of bonding and road-trippage.  Now, if I could just get to Idaho before I leave this part of the country…
Posted by Unknown

gretchen said...
This comment has been removed by the author.
8:08 AM

um...so apparently portland is the city version of my university. i'm definitely not even a little bit kidding. case in point: wesleyan students have recently begun using the slogan "keep wesleyan weird" to protest the admission of non-hipster, new-england-prepsters into the university. awesome.