Within my first few days of arriving in eastern Washington I started noticing these odd little shacks along the road that said ‘Espresso.’  At first I just kind of ignored them, thinking that it was maybe a Yakima oddity (and at that point EVERYTHING here seemed a little odd).  But then I started seeing them everywhere.  In every town, no matter how big or small.  Espresso shacks.  Not coffee-  Espresso.  And literally shacks.  Little one-room buildings that you drive up to and buy your caffeinated beverage of choice.  As I have learned, Pacific Northwesterners love their coffee.  They’re not only in central Washington but in every town from here to the Oregon coast, so one could assume they are ubiquitous in this region.

So I wondered if the coffee at these places is any good.  And I can’t really get a straight answer from people.  Clearly they must have business because in a town that may only have one gas station there are usually 2-3 espresso shacks.  But yet I haven’t really found people who go to them with any frequency.  It’s this odd phenomenon that I can’t quite figure out.  Because the pacific northwest is by and large a place where people tend to be laid-back, and particularly leisurely about enjoying their coffee.  They linger at a cafe for hours, chatting with a friend, playing on their Mac laptops, or reading a philosophical treatise.  So who is actually buying their coffee from these road-side drive-through coffee shacks?  It’s baffling.

Another thing I have noticed is that, perhaps due to the sheer volume of them, their owners have found it necessary to “differentiate” themselves from one another with creative (and sometimes obscene) names or themes.  Maybe a country-western theme, or perhaps a cozy homey feel.  Or maybe just painting your particular shack neon colors.  It seems there is no limit to the ways in which people seek to differentiate themselves and find a “niche” market within the coffee-drinking populace.  Before I tell you about my favorite theme (insert huge spoonfuls of sarcasm when reading the word favorite) I have another question- Who owns these?  And how do you start one?  What are the zoning laws for them?  Ok, so that’s three questions.  It’s just that they appear in the most random of places, seriously, it’s unbelievable.  I can’t figure it out.  They’re in the parking lot of a grocery store. Across the street from a fruit shipping plant.  On some random street with nothing else around.  They’re so small they almost blend in, but then again, they stick out as these oddities (at least to me).

In any event, my “favorite” gimmick for attracting customers is the Risqué Sexylicious Theme.  That’s a technical term.  Two common ones I have seen are ‘Brewlesque’ and ‘Java Jugs.’  On the sides of these particular shacks you will often witness hand-painted women in bathing suits.  We’re talking like a sixth grader would paint.  Classy.  And peering inside these fine establishments you will invariably find the staff to be a well-endowed woman wearing nothing but a bra and panties.  Yes, that is correct.  A woman in lingerie handing you your morning cup ‘o joe.  I’m fairly certain most men wouldn’t even NEED the caffeine because they would certainly be WIDE AWAKE after that.  My first thought about this is- aren’t you basically nixing half of the population (ie women) by making that your gimmick?  If there is a woman out there who would buy her coffee from a place where the barista is boobalicious all up in your biscotti, please let me know.  And I will personally pay for your therapist.  I jest, but seriously, I’m fairly certain that even if Java Jugs had the very best coffee in a 20 mile radius, I would not patronize that shack. Call me old fashioned, but I like my baristas clothed.  Preferably in a black shirt, khaki pants, and a green apron.

This past weekend I decided it was time to document evidence of their existence as “research” for my blog.  So I took my camera with me on our daily outings and when it was convenient (ie, not holding up a dozen cars by my stopping) I took a few shack photos.  Without further ado, the espresso shacks of eastern Washington: 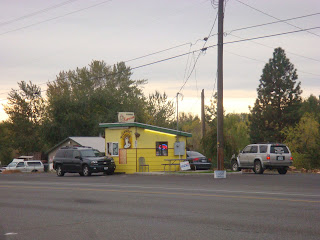 Typical neon espresso shack.  This one is in Naches, a town of about 500.  Please note there are THREE cars there 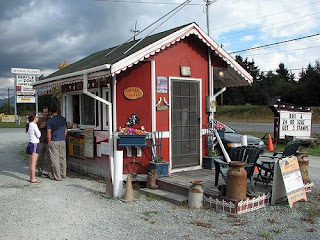 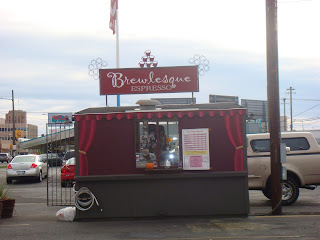 And the infamous Brewlesque
Posted by Unknown

So glad you noticed the same thing!This is very much a Washington thing that struck me as odd but now I occasionally go to them - they're usually shorter lines than Starbucks or another coffee shop, often drive-thrus, and my favorite one is on the way to a nearby ski resort - nice convenient place to get coffee. Haven't seen any of the brewlesque type though :)

Sounds like you're having an awesome time out here - hope we can meet up in Seattle some weekend!

2. i totally agree, these things are everywhere and i was ultimately perplexed by them. very washington.

3. while the coffee isn't great, it's better than gas station coffee, making the stands a welcome addition on a road trip

4. funny story about the coffee place where the workers wear bras and chones. i was watching the news in seattle one day and they had a story about how one of these espresso stands had a problem with a man who would flash the workers. one night he came by and flashed and then drove away a bit and parked. so the worker prepared a boiling pot of water and then beckoned the guy to come back through the drive thru. he did. and when he flashed, she dumped the pot of boiling water on him. hahaha.

ah, so glad someone photographed these. great commentary too! i meant to get some shots of them while i was visiting, but we ended up spending more time in seattle than the outskirts. i'm from the east coast and i too found them very odd yet appealing. they're usually so brightly colored, and stood out so nicely against the grey skies.