We started out the week volunteering to help set up the Christmas displays at The Lighthouse Shoppe, a thrift store run by the Union Gospel Mission.  We volunteer there during the week, but they were having one evening wherein they could make a big push to get the whole place decorated and all of the Christmas products out on display.  Now, this place is like a Jewish grandmother’s heaven (except for the Christmas part)- chotzkes everywhere.  EH.VRE.WHERE. This place has multiple rooms set up with every possible imaginable kind of houseware, donated by people and then resold at an incredibly modest price.  There is one showcase that has about, ohhh, 38 different sets of salt and pepper shakers.  No lie.  An entire display. It’s seriously so overwhelmingly amazing, and I have bought more than one birthday gift from that treasure trove of goodies.  Including a 20 minute Richard Simmons exercise VHS from the 1980s.  I couldn’t make this stuff up, folks.

It was our task that evening to sort through the 70+ boxes of Christmas items to decorate an area of the store and include in our “display” items to be sold.  We were divided into teams for a sort of Top Design competition and set free.  We would be judged on creativity, quantity of goods used, team unity, and use of space.  Done and done.  To be honest, I think our team had an unfair advantage because we had the front display windows.  And there’s no getting around the fact that they have to be the best.  Plus, we had two big empty tables just asking to be filled to the max with goodies.  And so it went.  I took charge of one window and made a Red and Gold theme.  I literally found every last red and gold item in the boxes and put it into my display.  It was great.  Our other window had a “vintage Christmas” theme, also excellent.  There really was no contest (though my fellow students would disagree), and our team won the competition.  Pictures of our winning area: 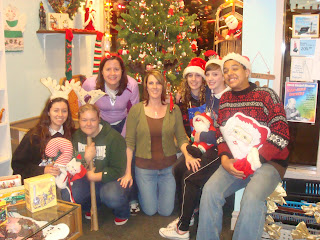 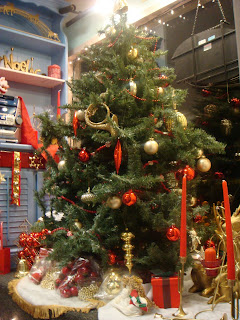 My "red and gold" area 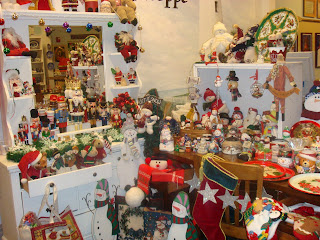 Chotzke Heaven
Then came Friday- our last day of weeklong classes, finishing the book of Revelation.  Basically the most intense week ever.  In honor of our great teacher (who also taught Genesis), we made it Ken Sutton Appreciation Day.  Phase one of KSAD was Crazy Hair Day, and let me tell you, we had some CRAAAAYZAY hair.  The crucial element of KSAD, however, were the Tshirts.  We all designed and wore a personalized KSAD Tshirt, highlighting one of Ken’s many Kenisms.  “Don’t panic, it’s organic” (In reference to the fish and barley Jesus used to feed the 5,000); “If the pastor has a mullet, fine by me, but if his wife has a pink wig, LEAVE.  She’s outshining Jesus, and we don’t need divas in church” (In reference to, well, divas in churches); “Support the H.A.D. Fund” (In reference to the fact that Ken has ‘Hairless Ankle Disease’); “I am no the Bill O’Reilly of the Revelation.  I am not opining.  This is not the No Spin Zone.”  And many many more.  As you can imagine, we had a fun week being taught by him. 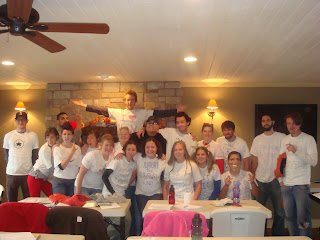 Over the weekend pretty much everyone headed over to Seattle.  As it turns out I made it to the round of interviews for Columbia Business School (holla!), for which they do local alumni interviews.  I found this out Thursday night. While there was no one in the Yakima area doing interviews (shocker), there were several in Seattle, and “coincidentally” a woman was available to interview me on Saturday morning. It just so happens I found out about my interview 2 days before I happened to be going to the closest city where there are interviewers and it just so happens there was an interviewer available? Who just so happened to be a woman who is in my same industry (healthcare) and who just graduated in May, having started BSchool at the same age I would start were I to get in?  Sometimes God really impresses me how he visibly works things together for us.  That kind of stuff defies probability and points only one way- heavenward.  Anyhow, the interview went well, thank you for asking.  I’m definitely a bit out of practice, but so it goes.  Now it’s time to wait.  Cue Final Jeopardy music.

I spent the weekend catching up with old friends.  Five friends from Penn currently live in Seattle, and I was able to see them all, and it was such a glorious time of old friends, peace, and rest.  I didn’t really take many pictures, but I do have one of the Spangler Insurance company, and the view from my friend Rachel’s apartment.  Tough life. 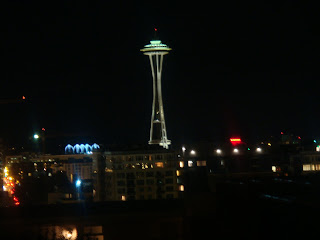 Yes, this is her view.  The whole skyline is also off to the left.  I'm jealous 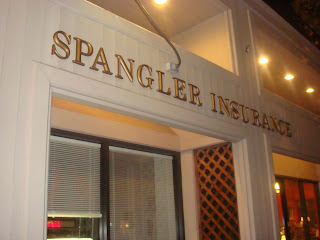 All in all, a grand week and weekend.  It’s hard to believe I am writing this during week 12, our last week before Mexico.  Did I mention we’re leaving in one week?  Yea.  I’ll try to get a few posts in before I leave.  I’m not sure what my computer access will be like while south of the border, but rest assured even if I have to write my blogs on pen and paper and then type them all when I come home, you WILL hear about Mexico.  Rock on.