Some of our friends here in San Miguel do work with a native tribe called the Chichimecas. They are a semi-nomadic Indian tribe, and several of their villages are about an hour drive from the city. The poverty in which these people live was described to us before going, but I don't think any words quite prepare one for the experience of extreme poverty. We're talking basic huts of mud, with roofs made from whatever kind of metal scraps are available. Dusty dirty "roads" and not a lot else. They have electricity but don't use it often because of the expense. Our team went to play with the kids for an afternoon and perform a few dramas for them. Even though we were just playing soccer and Duck Duck Goose, the children were overjoyed. They came in their "dress up" clothes since we were visiting them. It was a humbling experience, to say the least.

This is a people group who has refused any kind of government aid, who is firmly set in their ways and traditions, and who is extremely resistant to any kind of outside influence. Apparently even when volunteers come to help with medical needs or to hand out medicines, the parents will often hide the children in the houses and refuse to let them be seen. We found that some people would not even speak to us, though because of the relationship and trust that had been built with our friends, most people talked to us. I was somewhat surprised (though perhaps I shouldn't have been, as I now better understand the culture here) to see many of the adults visibly intoxicated. In the middle of the day. On a Sunday. I was later informed that there is a huge drug and alcohol problem amongst the Chichimecas, because of the intense poverty, particularly among the men. In this and other small villages around here, upwards of 80% of the husbands leave for the U.S. to seek work, and a large percentage of those never return, either because they die in the dessert, are killed, or simply forget about their families. The situation is terribly sad, and I couldn't help but feeling absolutely and utterly helpless. While it was "nice" to go and spend an afternoon playing with the kids, loving them, and giving them candy, it just seemed (and seems) so adequate when compared to the needs. But, at least I know there are people doing their best to meet the needs of the Chichimecas on a more consistent basis. In any event, it was certainly a day to love on these children and serve them.

Though the adults do not like to be photographed, and I honestly did not feel it was appropriate to take many pictures, I did take a few while we were there. 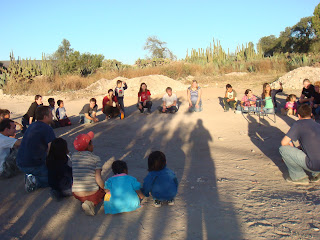 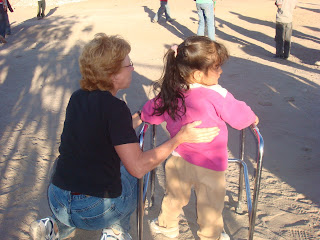 One little girl, Eva, had cerebral palsy and had much difficulty getting around. The most memorable moment of the day was during Duck Duck Goose when one of our team members picked her up and carried her around the circle when she was tagged. The smile on her face was one of pure joy 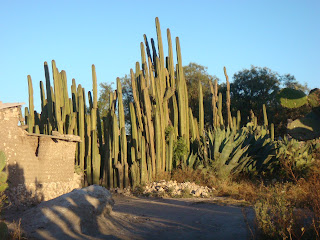 Some of the houses on the left, and the intense cacti all over 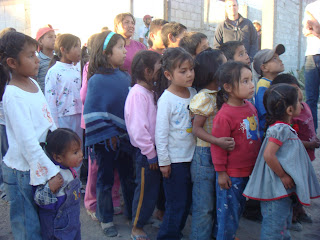 Children waiting in line for candy 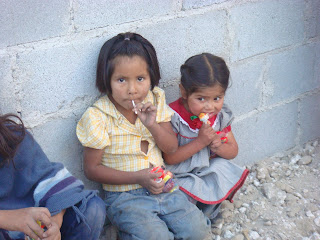 So so adorable
Posted by Unknown