So the whole Orthodox thing is new to me. I grew up in the Catholic church and now tend to be of the Protestant persuasion, but not even in a tourist capacity have I experienced the Orthodox church. Thus I took care to absorb as much information as possible.

I’m not sure whether this is an Orthodox thing or a Romania thing, but the cemeteries here are different than any I’ve seen before. While you can’t so much tell with the snow, apparently each grave site is a garden, dutifully maintained by the deceased person’s relatives. I hear it’s a beautiful sight in summer. 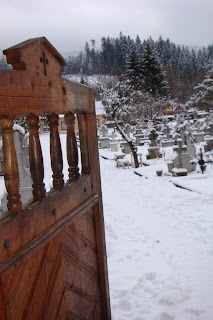 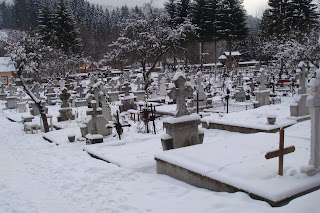 Just for humor’s sake, I took a picture of the sign that greets you as you enter the monastery. With this goes a story of our team leader Dave, who, on a visit to the monastery in the summer specifically wore his longest shorts (not that he has shorts as short as those pictured, or even close) to not have any kind of problems. But apparently he was not “respecting himself” enough, because they kindly asked him to wear a floor-length skirt, which they provided. Yes, a skirt.  Thankfully in winter we were all appropriately dressed. But rumor has it that I will see many a Romanian man in summer attired in shorts shorter than I care to imagine. 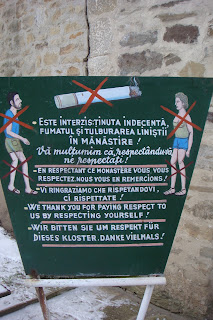 Moving on to the monastery: 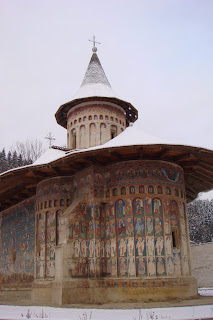 Not what you were expecting? Me neither. But how sweet. We spent so much time looking at all the various paintings and discussing them. I’ll talk about a few of my favorites. Please note that if you click on any of these pictures it will show you a bigger version of it, thus enabling you to see the detail. 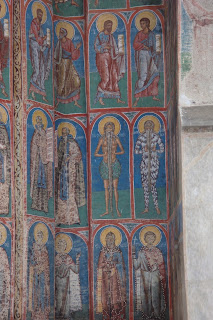 Focus on the dude on the right in the middle. This is John the Baptist. Apparently this is how he is depicted in Orthodox paintings- covered in fur and with a long beard. Pretty interesting. 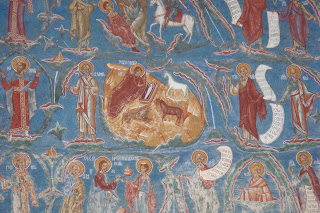 In the center you can see the manger scene, but it was amidst so many other paintings on the largest wall, you could almost miss it. Seriously, there were dozens of little vignettes and people. If only I could read Cyrillic to know what those scrolls say! 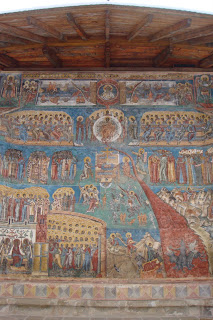 So this is a depiction of the Final Judgment time- God at the top in the center, Jesus one level below, and the Holy Spirit below Jesus, depicted as a dove. On the left are the people on their way to heaven, on the right those going to hell. At the level where God is are all the zodiac signs (apparently they had some fascination with the zodiac), the Jesus level has the 12 disciples and a bunch of saints, and then I have a few more pictures that are close-ups of some of the lower levels. 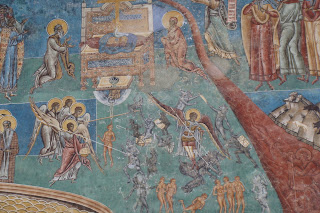 Here is a closeup of the vignette below the Holy Spirit where a man is being judged. Depicted are angels on the left adding weights to a scale, presumably “good deeds” and on the right are demons adding weights, presumably “bad deeds.” This is fascinating to me, because it is an unquestionably unbiblical view of God’s judgment. Nowhere in the Bible does God ever say that the way to heaven is by doing more good deeds than bad or by being a “good person” or that when we stand before God in judgment that we will be judged by our good vs bad works. In fact, explicitly and repeatedly we read that the way to heaven is through faith in Jesus Christ as our Savior. Faith and faith alone. Jesus says, “I am the way, the truth, and the life. No one comes to the Father except through me.” God is perfect (holy), and even one bad deed/sin we have committed (and I sure have committed many more than that!) disqualifies us from being in his presence. But Jesus paid the penalty for all of our sins by dying on the cross, and anyone who accepts this free gift, turns from their sin and follows Christ will spend eternity with God. Period. None of this ‘weighing of scales’ business. I have no clue what the Orthodox Church believes or teaches, but all I can say is that this particular painting (which presumably wouldn’t be there if it wasn’t what they believed?) is not an accurate portrayal of Christianity. 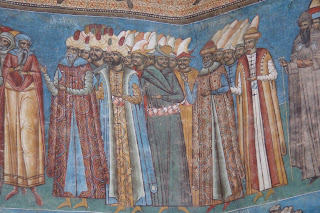 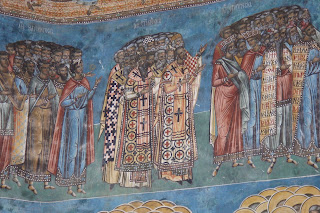 One last note- The first picture is of the people going to hell, and the second of the people going to heaven. If you notice, there is a clear difference in the “look” of these two groups. As it turns out, there was huge amount of racism against Turkish/Arabic people on the part of the Romanians (something about a war), so it probably is no coincidence that all the people bound for hell look Arabic while all those on their way to heaven are Romania. Fascinating. Sad, but fascinating. Gotta love racist religious art.

Anyhow, I am quite certain that I will see many an Orthodox church as I live in Romania, but given that this was my first, and it was a highly ornate monastery, I thought it worth sharing.

I tried clicking on the pictures but nothing happened to enlarge them. There are fairly standard positions and depictions in Orthodoxy, but it can change depending on time period and location. Look forward to hearing more about your time in Iasi!

Check out this new Christian band that just released their first album.

From what I heard on the samples site, they sound really good.

"As it turns out, there was huge amount of racism against Turkish/Arabic people on the part of the Romanians"

If only you had the slightest idea how ...ehem wired is what you wrote here.
This church was built in 1488 and painted in 1547 and you apply concepts like racism to those times...
By the way middle eve Romanians (specifically Moldavians in this case) had no contact with Arabs and Turks(the Ottoman empire to be exact) was comprised of diffrent ethnicity(Armenians, Greeks, Bulgarians, Serbs, Aromanians, etc.) and races(most of them were from the same race as we are).

I was just reading some things that made me think back to the comment ClujStuff made on here. I didn't think about it at the time because I thought perhaps I wasn't as aware of Romanian history as I thought I was. It seems like you are saying that I am incorrect in stating that racism against Turkish influenced such paintings as seen on the monastery where all the people "assigned" to hell look Turkish, based on the dates when the monastery was built (that it was too early for something like that to occur?). But it's EXACTLY the right kind of time period, given the Ottoman empire's attempts to take over Romania, all the history with Vlad Tepes, and the intense hatred he had for the Turks, and such intense warfare in the country in the mid to late 1400s. So, I'm not sure if I'm misunderstanding what you meant, but I think what I said in my entry stands as historically accurate.