Our team recently took a trip out to the Romanian countryside for a week to get to know one another better, take some time away from the city in a much needed (at least for the rest of the team who has been here much longer than I!) retreat, and talk out about our individual roles on the team and our vision for the next six months. It was a sweet time, and it gave me a feel for more of Romanian than Bloc Apartment Land in Winter. The three hour train ride out there was pretty special, given that joining us in our car was a group of 25 Romanian high schoolers on their way to a ski trip. Excellent. You know, high schools are pretty much the same around the world. Loud. And kind of oblivious to anyone else but themselves. It was all well and good when they kept to themselves, but I have to say that when they busted out the guitar and started playing AND SINGING "Because I Got High" I definitely was 'over' sharing space with them.
Voroneti is famous because it has a monastery, of the Orthodox variety. I will write another entry about our visit to it, since it was an interesting experience, given that I have never been in an Orthodox anything. We stayed up the mountain from the town in a little "bed and breakfast" (though they don't call them that here) run by a lovely Romanian couple. Did I mention that the guy built the whole place himself? 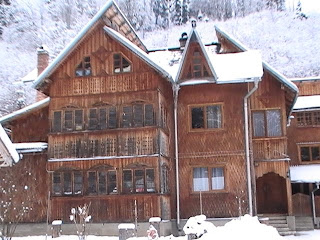 The area was so quaint. That is the best word to describe it. Like the countryside should be. Loads of wells where people drew their own water (we're standing in front of one in the first picture below with our best Romanian smiles), horse-drawn carts in abundance, and wonderful food. The B&B owners made dinner for us every night, and while everything was absolutely delicious (and traditional Romanian), the most interesting meal was whole trout. Aside from the fact that I haven't eaten any fish since coming to Romania and was delighted to eat some, this also marked a "first" in the category of eating a whole fish. Oh man, it was taaasty. 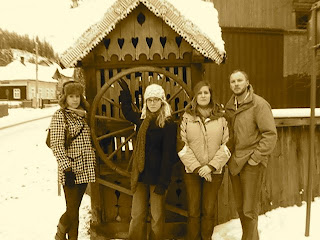 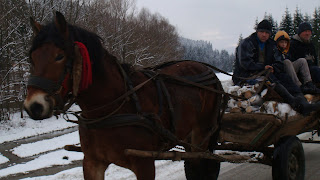 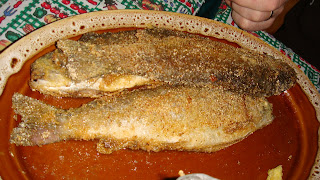 As you can see, there was plenty of snow greeting us in Voroneti. It basically had snowed for the three days prior to our arrival, so we took it upon ourselves to enjoy the snow while we had it. And while it wasn't brown and sludgy like the day after snow in Iasi. Seriously, it was amazing, and I experienced THE best sledding of my life, down an absolutely monstrous hill that had no road or river at its bottom (which all the best hills seem to have), so it was awesome. The final pictures are from our adventures, me just standing in a vast field of white, and then Erin in one of our "jumping" adventures, wherein we jumped off a ledge, make crazy poses, then landed in a foot of snow. As a result of this trip we also have our first picture together as a team. Such a sweet photo. I can't wait to go back in the spring! 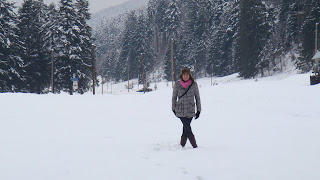 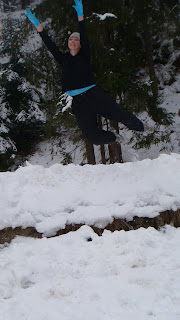 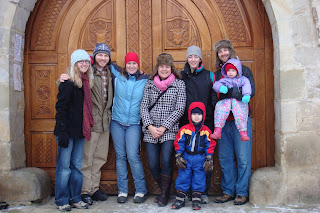