One of the harder things for me that I didn’t particularly know before going to Israel was that most of the major Christian sites have churches built over them now. Call me naïve, but I guess I thought that the hill on which Jesus was crucified would still be just that. Not a hugenormous church wherein it is utterly impossible to have any kind of worshipful experience for the massive crowds, “competing” Christian churches doing their various rituals literally overtop one another, and just a lot of STUFF (gold, icons, statues, candles, etcetc). As I wrote earlier, most of the places around the Sea of Galilee were calmer, fewer people, so that was nice, but Jerusalem and Bethlehem in particular were difficult for me. At both the Church of the Nativity (Bethlehem) and the Church of the Holy Sepulchre (Jerusalem) I just felt overwhelmed by lots of people, gold, and icons. So the crowds of people aside, I am still very conflicted about some things: What is the point of all the STUFF? Is all the gold and icons and statues and candles helpful in creating a worshipful atmosphere? Is it really an "appropriate" tribute to the King who made Himself nothing and came to earth to serve? And is it really appropriate to have an offering basket just inches away from the site where Jesus may have been born? I felt somehow like I was "missing the point" as people pushed and crowded to touch the altar over the crucifixion site, to touch the star at the manger site. I kept thinking, yes, it's nice to be here, but it doesn't actually confer... anything... to touch it or kiss it. And how far is that really from idolatry? 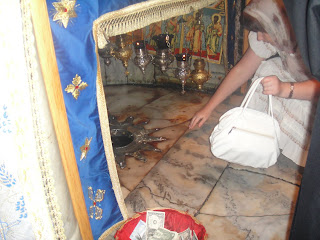 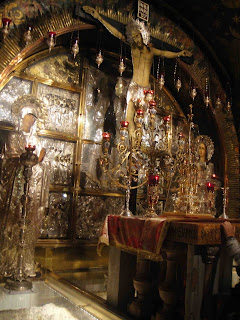 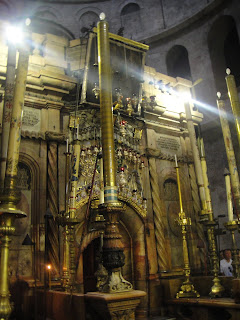 Church of Holy Sepulchre- Tomb
Now, I realize that what I've said might be utterly controversial, but it's something I'm genuinely thinking about and wondering and certainly not something I say to be judgmental. I am trying to understand the intent, the point, the 'why' behind these things, because for the most part it just made me sad to see it all and drastically detracted from my ability to have a worshipful experience. If anyone has any (productive and constructive) thoughts from a different viewpoint, I would be happy to hear from you. In any event, I think had I known/expected it, it wouldn’t have been such a big deal, but so it goes.
Another issue I had with the whole church scene, as alluded to above, is how the various Christian denominations "compete" over the space. The Church of the Holy Sepulchre is the most striking example, because of the issue of Status Quo. In short, several different denominations have claim to various pieces of the church. Greek Orthodox, Roman Catholic, and Armenian churches have the biggest chunks and several others have smaller claims as well. They all have their own little corners of the church, and then there are shared spaces that everyone uses (it's a huge huge church). Well they have all these regulations and rules about who can be where and when and do what and how, and for the shared spaces they all have to agree before any changes can be made. You know what the result is? Violence and discord. Like actual physical violence between clergy of the various groups on several occasions. No lie. You can actually feel the tension in the place. I was in there when the Greek Orthodox priests and the Franciscan Friars were doing their rituals through the various locations AT THE SAME TIME and it was just... uncomfortable. Different areas are closed and the groups do this intricate strategic dance of avoiding one another. And you're there as a tourist, hearing chants from different corners of the church, and ick, it is just sad sad sad. And the other result? The church is in total disrepair. Apparently they can't even agree on the terms of much needed construction projects, so nothing gets done. The classic example of this is The Ladder, situated above the main entrance at the right window: 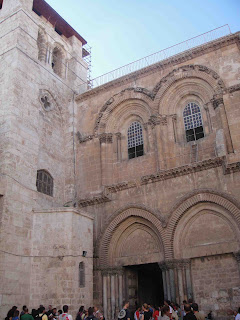 It has been there for 150 years. I wish I were kidding. Someone put it there to make a change when the windows and doors were "shared" but it wasn't actually ok, so it has just been left there. How sad is it that basically THE major church of Christendom in Jerusalem is oozing disunity and conflict?
Shifting gears a bit- Israel is REALLY not a Christian country. Obviously I knew that it wasn’t, but not to the DEGREE to which it really isn’t, nor how actually difficult it would be to worship there as a Christian. Take Bethlehem for instance. Turns out it’s under the Palestinian Authority, aka a walled city where the people (all Arabs) can’t leave. Not so much the quaint little village where Jesus was born. Want to see the church built over the manger site? First sort through all the Arab cab drivers and shopkeepers trying to swindle you and all the Arabs staring at you because you’re “scantily clad” with your polo shirt and knee-length skirt, then tune out the Muslim call to prayer that is BLARING overhead and maybe, just maybe, you can envision it as it was in Jesus time. I recognize the potential for vitriolic anonymous comments in response to that last sentence, but I hope readers understand that this was my experience, my true actual non-exaggerated experience, one that was difficult for me as a white female Western Christian. We just felt so out of place and even unwelcome as we were trying to have our religious experiences, and I didn't even remotely anticipate that that would happen. And that's really my point.
Another example of this was the Via Dolorosa, aka the road Jesus walked on His way to being crucified. We wanted to do the Stations of the Cross with the Franciscan Friars on Friday afternoon. However, we didn't know that 400 other people wanted to do it as well. So there we were with 398 other people traipsing through the narrow streets, trying to stay near the teeny tiny microphone speaker that one of the Friars carried, the police making us stay off to one "side" of the narrow street, a guy on a moped honking his way through the crowd (cars aren't so much supposed to be in the Old City, so I don't know how that happened), the Muslim call to prayer blasting overhead in the middle of it, pretty much dominating over the teeny tiny speaker the Friar had, making your way through the Muslim quarter that is now just lined with trinkety shops, and watching as a little Arab boy snarled at a nun. Yes, a NUN. Yea, so that was not so much what I envisioned when I thought about walking the Via Dolorosa. 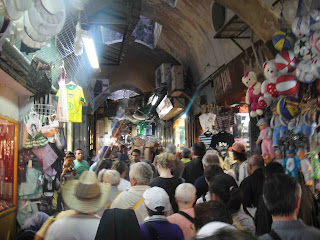 And again, I understand that this is just THE WAY IT IS. The Via Dolorosa just IS the Muslim Quarter today. It just DOES have loads of shops lining the streets, and the Muslim call to prayer of COURSE plays loudly five times a day. But here again, I just didn't know or expect that, so it was like a big fat slap in the face. And of course it completely altered my experience and perception. And that is ok. Thankfully I had quite a few pleasant experiences to balance these out. And to be honest, I am even thankful that I was able to experience this ugly side, because that is actually reality. Not some sugar-coated idea I had in my head. Tough to see, but good to learn.
Anyone else out there have similar thoughts or experiences while in Israel?
Posted by Unknown

I know so many people who have gone to Israel--mostly, though certainly not all, Christians--and none reported on this in quite the precise way you did. I knew there was a church at the site of Jesus' birth; and I think I even knew about the one where He died. But somehow I didn't think they were *right on* the spots. So sad, so detracting, so of-a-different-time. And yes, the division of the church makes a mockery of the universal church indeed.
Thanks for this! I always enjoy your blog but this post was particularly terrific.

" Israel is REALLY not a Christian country."

I've always been fascinated about this truth (and in a good way!) It's not a Christian country although Christ was born there. It's this amazing irony that enthralls me each time Israel comes to mind. It makes me believe more on the bible. Remember when it said, no prophet will be accepted in his own hometown?