I've been to D.C. loads of times. And I really enjoy it each time, probably because several dear friends live there and I get to hang out with them. I like visiting D.C., but I never ever feel like I would want to live there. I was particularly excited to visit this time simply to see people I hadn't seen in a long time. And what a wonderful combination of people from various chapters of my life I was able to see!
As I didn't have a car, and the cost of a car rental PLUS gas would cost more than this grad student can fork over, I decided to take the bus from central PA to D.C. Which I was of course a bit skeptical about, because I am always skeptical about buses in America. But thankfully I'm starting to get over it, as I've had several very normal and in fact reasonably enjoyable bus trips. Yes it took 5.5 hours to get there instead of the 4 it would take to drive, but hey, I could sleep and listen to music, so it was just dandy.
My first day I had the distinct privilege of hanging out with a Nigerian friend from our church in Romania who came to the U.S. for part of her summer break to visit a cousin who lives in Maryland near D.C. I was SO excited to see her, as it had been nearly a month since I had left Romania and I was craving ANYTHING related to my life there. As it was her first time in the U.S., we did the touristy awesomeness starting at the Natural History Museum and making our way down to the Lincoln Memorial, taking lots of pictures along the way at the various monuments.
We had a lot of fun in the Africa section of the Natural History Museum: 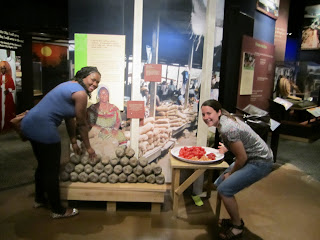 And of course enjoyed the beautiful monuments: 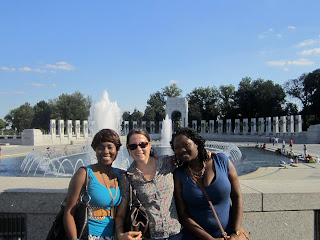 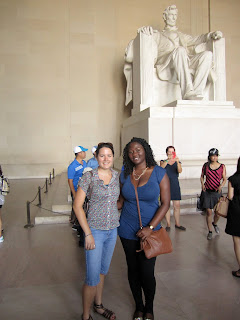 We ate dinner at T.G.I.Fridays, which was so fun, because it was all so new and novel to her. She was really confused why we had to leave 20% EXTRA for the waitress, so we explained the way tipping works in America. Really interesting to "see" my country through totally fresh eyes. It was GREAT to spend an entire day with her and to get to know her cousin and cousin's friend. And- let's be honest- to speak a little pidgin English and look super white in all the pictures because of how dark they are. 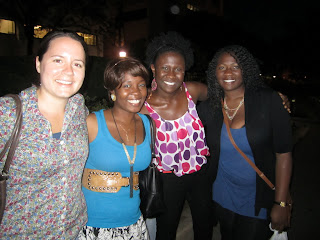 Then I was able to see a dear friend from college who lives and works in D.C. I hadn't seen him since before I left for Romania, so it was truly a delight! His mom was in town for the weekend, which was an extra special bonus. Because she was in town, we did a bit of the touristy thing as well, but we mostly just chillaxed and caught up. 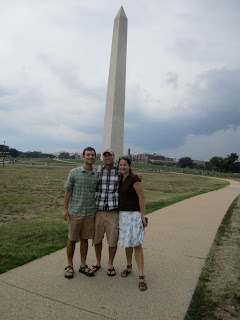 My next stop was visiting one of my aunts who also lives in Maryland near D.C. I really enjoy spending time with her and her daughter, and as it was rainy and cloudy for my day there, we had a really relaxing time chillaxing at her house and going to a movie. I didn't actually take any pictures with her or my cousin, but I did take plenty of pictures of their adorable new dog Lilly. As she is quite literally constantly moving, I didn't get a single shot that wasn't blurry, but here is one where you can at least see her whole body... 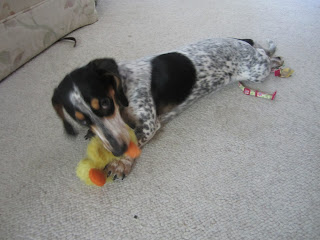 One super exciting surprise was the Africa Fest that was taking place in the town where my aunt lives, and it happened to be right next to the movie theatre. My first thought was, "I need to look for suya!" This is a food- essentially meat kebabs, often served by street vendors- that my Nigerian friends talk about all. the. time. But one which I haven't really tried because the beef isn't great for it in Romania, and no one has a grill. Here is a link with a reasonable recipe (though americanized and fancy) and pictures to give you an idea (though I made with beef, not chicken). I was not disappointed and REALLY enjoyed my first true suya experience. I also met quite a few Africans just simply by being a white person eating suya. Apparently white people don't eat it? Or not with so much hot pepper on it? I don't really know, but it was delicious! 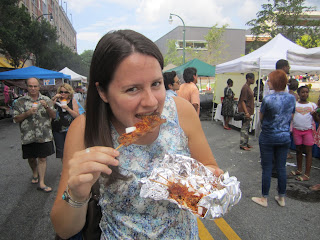 My last stop was visiting the family farm of my teammate Erin, as she and the kiddos were still in the U.S. for their furlough. I have met Erin's entire family and heard SO much about the farm, so it was a treat to spend some time there. And so delightful to spend time with Erin and the darling kiddos. Oh how I have missed them! Sweet Levi is getting so big! 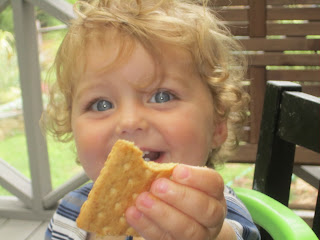 To top it all off, our Nigerian friend was able to come visit us at the farm for one of the days! So it was a mini Iasi-reunion in Maryland! We even managed to have a little wilderness adventure at Great Falls Park. 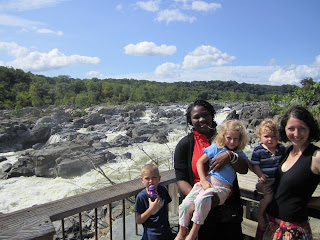 It's so peaceful at the farm, and this was a wonderful way to end a wonderful trip. It was so hard to say goodbye to them, knowing I may not see them for quite a long time. But I am very thankful for this time, and the memories will certainly live on in my heart. 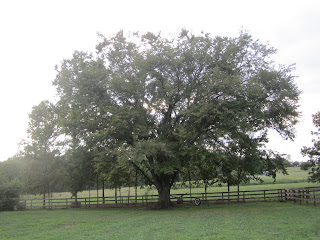 I bet your willingness to take a "bus ride" to DC had something to do with our ghetto bus adventure to Balti - if you do it there, you can do it anywhere in the world haha

So wish we were here to see you then :P