Since I just got back from a little bit of To-ing and Fro-ing, I want to have a little series of posts recapping the various cities I visited. Just sharing the highlights of some pretty sweet sites. If you've been reading along, you know that I drove across Romania to Cluj. Turns out that Romania is a beautiful country.
I had heard only good things about Cluj, and sure enough it was a lovely place. It kind of reminds me a lot of Iasi, except it seems like Ceausescu didn't get ahold of the city quite so much and communistify it (I love making up new words). As in, the center of town is mostly older nicer buildings, not the falling-apart blocks that are ubiquitous in Iasi. But it's reminiscent of Iasi for many reasons- it has a similar population, is a big "college town" so there are loads of students everywhere, there is a big Orthodox church and a big Catholic church, a national theatre, botanic gardens, a Iulius Mall, and a Piata Unirii. To name just a few.
It was a fascinating place to visit because I learned about an entirely different part of Romania. I live in the far far eastern part of the country, right next to the country of Moldova (which surely helps orient you, being that it is all of the size of Maryland), hence the region is called Moldavia. But the north central/western part of the country is called Translyvania, most famous for its castles and Draculaness. It is next to Hungary and formerly was part Hungary, so there are loads of Hungarians in the region. And in some ways it's kind of an entirely different culture. For instance, while Romania as a country is 90% Orthodox, the largest church in Cluj is a Hungarian Catholic church (Hungary is 70% Catholic). In Cluj there are Hungarian schools and universities, and entire neighborhoods where you would be hard-pressed to hear Romanian spoken. With this comes some interesting culture clashes, as that goes when wars arbitrarily split up countries and redraw border lines. I don't pretend to even remotely understand all the history behind the individual pieces of land that are now unified into Romania, but man, it's fascinating. Especially talking to someone in their 50s and someone in their 20s about it, as I did while there. Though I was only there for 17 hours, 8 of which I spent sleeping, I found the city to be quite lovely. Here are a few pictures to recap the sites of the city: 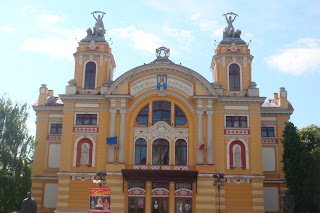 The National Theatre. Ohhh how I would love to see a show here! 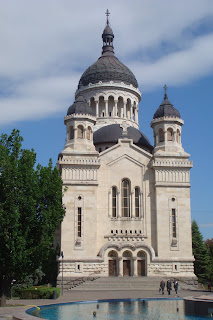 The main Orthodox church in the city. At night the fountain has a cool water/light show continuously going 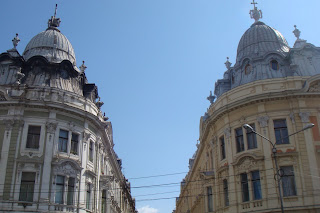 Symmetrical buildings! How cool is that?! 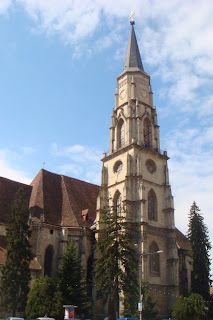 The Hungarians in Cluj are mainly Reformed 12.2% and just 5.5% are Catholic.
In fact the Romanian Catholics in Cluj, 5.8% slightly outnumber the Hungarian ones.

Thanks for the comment. Perhaps my information/view was skewed because I was staying with some Hungarian friends (reformed, actually) up near the botanical gardens. They told me the neighborhood was mostly Hungarian and it would be unusual to hear much Romanian there.

And I just said that the LARGEST church in Cluj is Hungarian Catholic, which I think is accurate. But the information you provided helps round out the picture.

"the region is called Moldavia".....we haven't called it so since the days of Vlad Tepes...it's simply Moldova and Transilvania.

Yes, you are right about the church being the largest in Cluj (in fact is the second largest church in Transilvania, after the Black Church in Brasov) and is indeed used by the Hungarian Roman Catholics.

I strongly recommend you to obtain statistical and historical data from Wikipedia rather than listening to people who may have an agenda specially when dealing with nationalistic or inter ethnic issues.